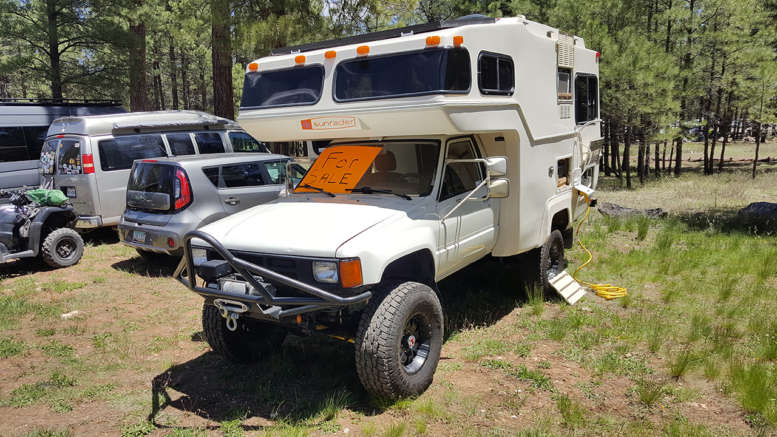 While attending Overland Expo West 2019, I was fortunate to park right next to Tim Lefler of Camp Verde, Arizona and his awesome 1984 Toyota Sunrader 4×4 motorhome. As you find with many people in the overland community, Tim was very kind. He even let me charge my GoPro mid-day off his rig. His background includes being a retired firefighter and a surfer.

As you can immediately see, Tim’s 1984 Toyota Sunrader has some great looking (and functional) overland upgrades. And after all, the Sunrader is a motorhome so it’s packed with amenities such as a heater, water heater, toilet, wet shower, outside shower, furnace, air conditioning and a host of other features. Beyond the obvious were many other practical upgrades. Tim was very gracious and gave me a detailed tour of his vintage Toyota RV motorhome.

The powertrain in Tim’s Sunrader is it’s original 4 cylinder 22R engine that produces 72 horsepower and 174 foot-pounds of torque. The transmission is a 5-speed manual. As Tim states, “It’s slow. If you’re in a hurry, this is not the rig for you.” Tim also added a larger 3 core HD radiator to keep things cool, and an upgraded brake master cylinder.

The undercarriage was beefed up significantly with a custom lift and Bilstein Shocks, along with a custom fabricated anti-sway bar that originally was fitted to a Ford Excursion. The rear end was swapped out for a Dana 60 posi rear axle. 4 wheel disc brakes were added. The entire load sits on 16” wheels with 33”. The Sunrader was dressed exteriorly with a winch and trail armor, giving it that quintessential overland appearance.

Tim added a Xantrex 100 Watt pure sine wave AC/DC inverter so you can plug in your laptop or a blender. The interior is now full of USB ports for electronic devices, along with a 12V accessory plug and a MT50 Solar charge meter. For external/shore power, Tim added a 30 amp, marine-grade inlet with a Progressive Dynamics power converter/charger.

To reduce power draw, new LED lighting was installed throughout. Tim added a 12V Fan-Tastic Vent Roof Fan where the old air conditioner was mounted. It’s thermostatically controlled, with 3-speeds and is reversible. Tim mentioned, “It’s really nice you leave it open and go for a hike or something, and when it gets too hot, the fan automatically kicks in, running off the solar and it keeps it really nice inside.”

The fridge was replaced in some updated cabinetry, with an Engle 12V compressor fridge, which is designed for 4-wheeling, so it cools at 100% efficiency even up to a 30 degree tilt.

Propane supply was updated with a new tank, hoses and regulator to fuel a new 3-burner propane stove w/ oven and a ducted heater. 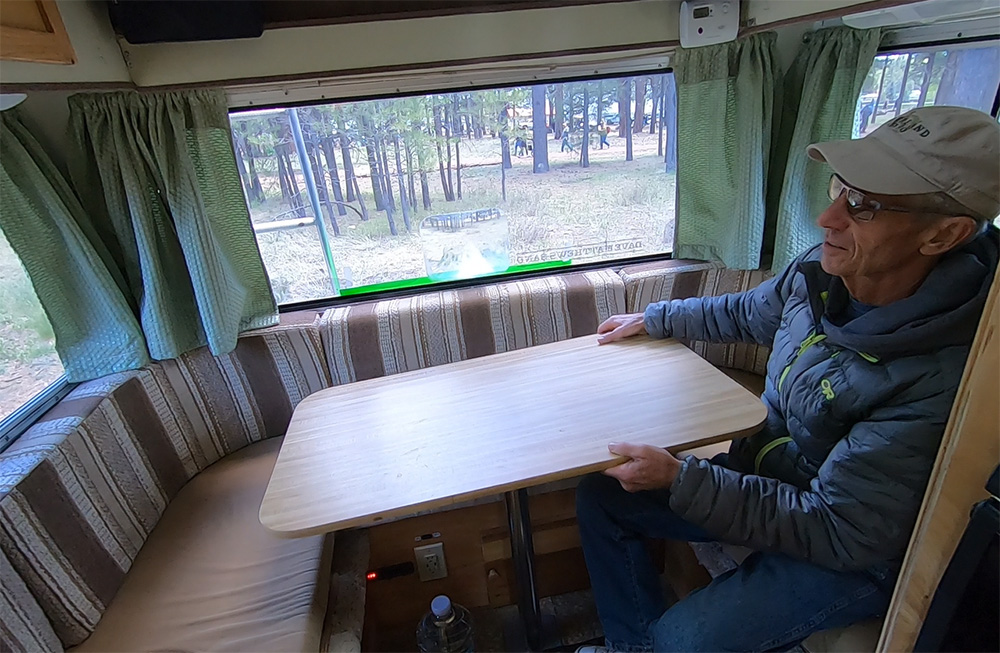 Tim showing me the dinette in his Toyota Sunrader. Nice View!

Exteriorly, Tim added a Yakima wide body roof rack system, and a Carefree awning for shade.
In the cab he changed out the seating to larger bucket seats, so you can still pass through the middle, yet be more comfortable when driving.

Tim pointed out that the rear dinette was one of the great features of the Toyota Sunrader. Apart from seating that wraps around the rear interior in a U-shape, the table slides out for easy access to the rear bench. It also drops down to form a platform for an additional bed. What’s really awesome is the view, thanks to large panoramic windows that wrap around the dinette. “It’s a small space, but it doesn’t feel like it because you have large windows that wrap all the way around”, states Tim.

As you can see in the pics/video, Tim was advertising his Sunrader for sale at Overland Expo West. His asking price was $39,000 with a couple offers pending. Someone with a pocket of cash is probably already the new owner of this awesome vintage overland rig! Tim did a great job and we think his Sunrader build is definitely a Savage Camper!