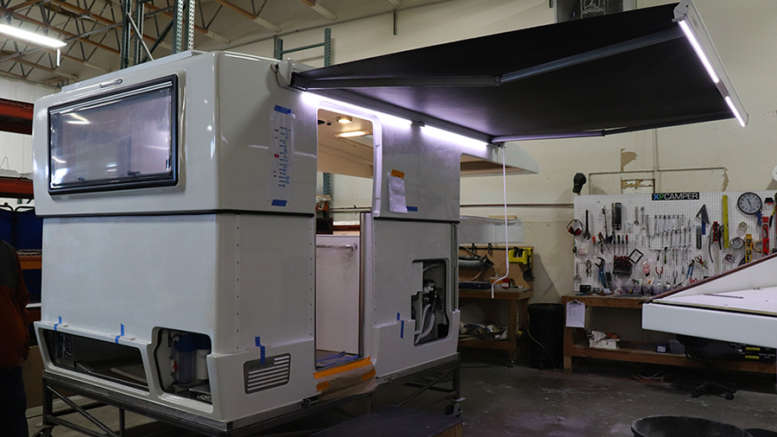 Marc Wassman, CEO of XPCamper in Grass Valley, CA took Savage Camper for a detailed walkaround of one of their new V1E camper builds in progress as it was nearing completion.

If you’re not already familiar with XPCamper, they manufacture these campers and custom aluminum flatbeds called XPTrays, that fit in this case to a new Ford F350. The result is quite an incredible & capable overland expedition camper.

The design & engineering of these campers is impressive. As Marc says, “These aren’t your grandparent’s camper”. Fabrication includes everything from a CNC press brake & router, to the XPCamper crew’s fine handiwork in action. Learn more about XPCamper’s Fabrication & Build Process

The camper contains an 80 gallon fresh water tank, and a 27 gallon grey water tank. Both are managed with high end pumps and marine-grade hoses.  Also within the water bay is access to the cassette toilet. This compartment is heated to prevent freezing. In the unlikely chance a hose is damaged for whatever reason, XPCamper includes a repair kit to patch any damaged water lines.

In the right-rear of the V1E camper, is the compartment that houses the 3-stage water filtration system. Combined with the pump and valves in the water hatch, a true expedition capability of this camper is the fact you can actually pump/filter water from a water source such as a stream to replenish your freshwater tank. This compartment has LED lighting and is also heated to prevent freezing.

Heat for the camper is provided by a diesel-powered Webasto dual top water/air heater, paired with a glycol heat exchanger. Diesel to run the heater is supplied via a 3 gallon fuel cell, or supply can be tied into the truck’s main fuel supply.

In the rear of the camper, there’s a large storage bay, lighted by an LED strip. Within this compartment is an outside shower, 110V AC, 12V DC & USB power outlets, as well as access to the camper’s electric lifter mechanism for the camper top. While there is an electric up/down switch to raise/lower the roof, the system also has a remote.  If the electric system were to ever go out, there is also an access hatch where the camper top can be manually cranked up/down.

The battery compartment resides towards the front-left of the camper. The particular camper we were reviewing featured four 6V batteries that create 600 Amp Hours @ 12V. Also in this compartment is a 2000W inverter. All wiring is marine grade.

Power can be generated via 3 flush-mount solar panels totaling 520W (170W each), with a 30 amp controller.

The camper also includes a 30 amp SmartPlug inlet for shore power. If the plug detects wrong voltage/power, it will not charge the camper. “This SmartPlug actually saved a client in Africa, where he forgot to switch the camper over from 110V to 230V and it wouldn’t charge the camper” states Mark. “It was a safety issue for the whole unit”.

A 3rd source of power generation is via the power out wire bundle in the front of the camper, which allows you to charge the camper batteries when the truck is running. This power out wire bundle also includes a brake light in the camper, and a set to run a secondary ARB fridge or SnoMaster fridge in the cab of the truck. All the wiring runs through a marine plug which uses water tight seals to pass wires through holes without using any caulking or silicone. In fact, no caulking is used throughout the entire camper.

The main control panel is in the cabin of the camper, and contains: 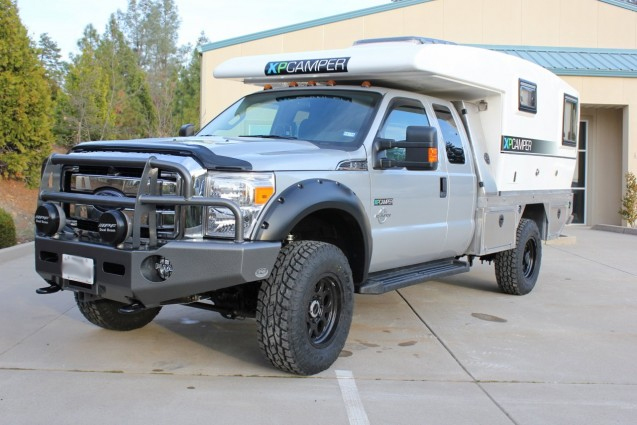 The tent portion of the camper, only visible when the roof is up, is 4 season. It’s triple insulated synthetic material, and uses waterproof zippers inside – the same as used in dry suits. Everything is sewn with self-sealing stitches, so there’s not really any way water can get in. The tent portion can be removed for long term storage or cleaning.

Some of the key features in the interior include:

To learn more, we’ve created a multi-part series of XPCamper Youtube videos; a couple of which are embedded in this article.