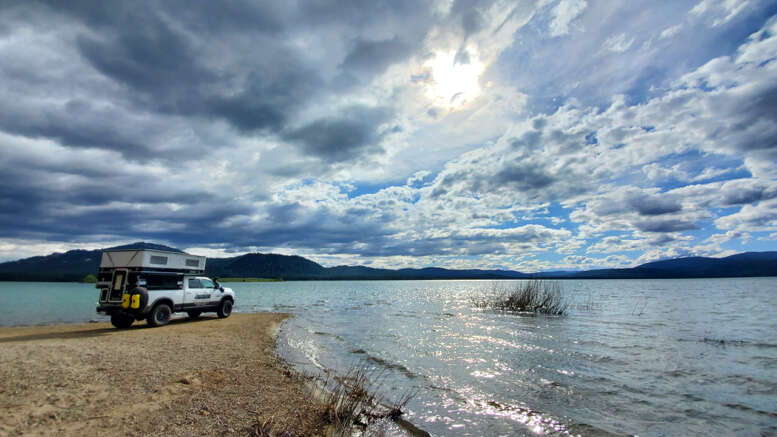 With a short time frame of roughly five days in the Four Wheel Camper AEV rig, I was able to squeeze in a couple Sierra Nevada adventures. The first involved the truck camper in an off road 4×4 adventure where a friend and I traversed a steep valley of dirt roads, through creek crossings, got caught in a surprise storm and made a bit of a dramatic exit.

After the 1st dramatic trip, cravings were strong for some rest and relaxation while still I still had the Four Wheel pop-up truck camper on-hand. I decided to head back out from the Bay Area through Truckee, CA and into the High Sierra valley near Portola, CA. I took a chance in hopes of finding campgrounds somewhere that might be open despite the ongoing pandemic.

Luck was on my side, as the pictures included can attest and this 2nd half of the trip did not disappoint in terms of adventure either. I was treated to some EPIC views at Lake Davis that put me in a frenzy of picture and video taking. The weather upon my arrival was in the low 70’s and just about perfect! I explored one half side of the lake, driving the Four Wheel Camper rig past multiple campgrounds, hitting a dirt road, then eventually turning back.

While traversing the roughly north eastern side of the lake, I detoured down a couple of dirt roads that headed towards the lake front, and if you get a chance to watch the accompanying video, I literally pulled up to a small peninsula outcropping with a front row seat to one of the most memorable views I’ve experienced in recent memory – what a view! I just had to park and take it all in as long as I could. Ultimately lasting a few hours, I took pictures that added to some of the best of my portfolio, and captured video of the sights and sounds while a High Sierra storm crept in from the East.

Slowly, the epic landscape of clouds grew, the wind picked up and it started to sprinkle. I tried to hold out for an epic sunset, but thought it might be best to pack it up and head for the campgrounds before dusk, especially because I didn’t know if they would start filling up. As with many High Sierra storms, it ended up retreating at dusk as fast as it started rolling in, so there were clear skies at night and I unfortunately missed what was probably a spectacular view of the sun setting behind the giant granite mountains across the mirror lake view.

Luckily, many spots within the campground were open. I didn’t realize at first, but the campground had running water toilets and sinks, so that was very convenient. I settled in, popped up the camper top within a few minutes, and started a detailed video review of the Hawk camper on the RAM 2500 AEV rig they loaned to me for the trip. With a couple previous short stints staying in these campers and now this trip, I started to get much more familiar with the functionality, conveniences and build experience behind these campers. You can go on a detailed tour around the camper with me in the accompanying video in this article.

As I mention in the video, Four Wheel Campers has been around for over 40 years, and you really get a feel for how mature their product is – how refined things are from a manufacturing standpoint and features that only come with time tested experience. Examples of this experience include things like an amber porch light to prevent attraction of bugs like mosquitos so they don’t get in your camper at night. Or, toggle switches mounted down low for outdoor LED lighting on the camper, so you can just reach in from the outside to flick them on without having to climb back in and out of the camper to do so. As an experienced camping individual of pretty much all genres myself, it’s these little things that I, and Four Wheel Camper owners really appreciate.

I encourage you to watch the accompanying video to explore how well Four Wheel pop-up campers are built and the many great features of convenience included.