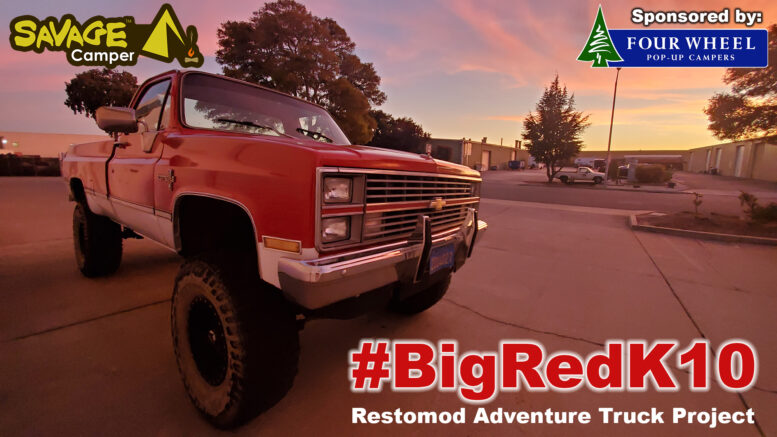 Savage Camper has recently launched a new project called #BigRedK10 which follows the restoration and overland upgrading journey of a 1983 Chevy K10 Scottsdale 4×4 long bed truck. Popularly dubbed a “squarebody”, this classic Chevy truck already features a 6 inch lift and Dana axles. Savage Camper is transforming the beefed up K10 into an ultimate restomod adventure truck with a camper that has off-grid power. Once completed, the truck will eventually travel to overland events and camping destinations throughout the western U.S starting later in the year.

A YouTube series of the #BigRedK10 project has already begun, with the launch of the pilot episode featuring restoration and refinishing of the truck bed. Future episodes will feature restoring, repairing and overland upgrading different portions of this Chevy K10 6.2L diesel that runs on 90% renewable biofuel.

As part of this 4×4 adventure truck build, Four Wheel Campers has come on board as the main sponsor, supplying the crown jewel that will cap #BigRedK10’s 8 foot bed, the Project M camper.

“Savage Camper has been working as partners and friends with Four Wheel Campers now for almost 5 years. As an overland and Four Wheel Camper enthusiast, I am beyond thrilled that #BigRedK10 will be capped with their Project M camper”, states Shad Davis, owner of Savage Camper. “There’s months of work ahead, but I believe the outcome will speak for itself, so stay tuned to the #BigRedK10 project!”

Dan Welty, VP, Four Wheel Campers of Woodland, CA commented, “We are looking forward to embarking on a fun and interesting project with Savage Camper. The pairing of this restored vintage truck and our new product, the Project M camper, creates a unique combination that is as cool as it is functional.”

As part of the sponsorship agreement, #BigRedK10 is slated to make its public debut in the Four Wheel Campers exhibition at Overland Expo West 2021 in September.