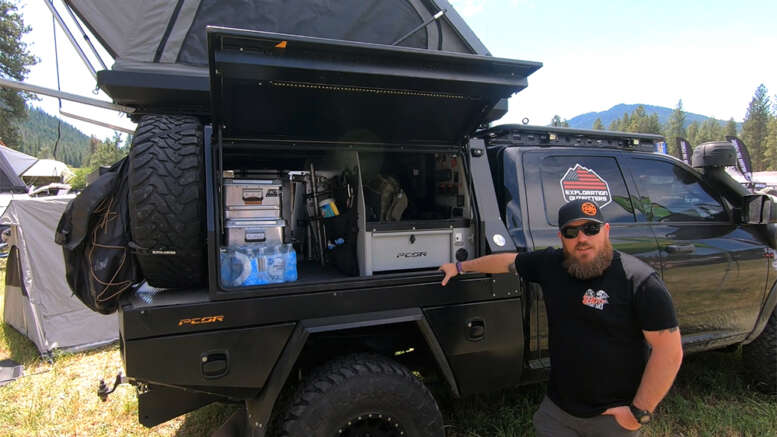 Storage and electronics compartment in the Patriot PCOR system

I ended up running across Matt with Exploration Outfitters of Oklahoma at the 2019 NW Overland Rally in Washington and took a video tour around the Patriot Camper’s X1H expedition trailer they had on display. I couldn’t help but also notice his rig parked next to the trailer, a burly RAM 2500 expedition truck that Exploration Outfitters custom built. I asked Matt if we could take a tour of it, and he kindly agreed. He mentioned, “We just finished a big trip to Moab and it’s been all over the western part of the US. Every time I use it, I like it a little bit more.” 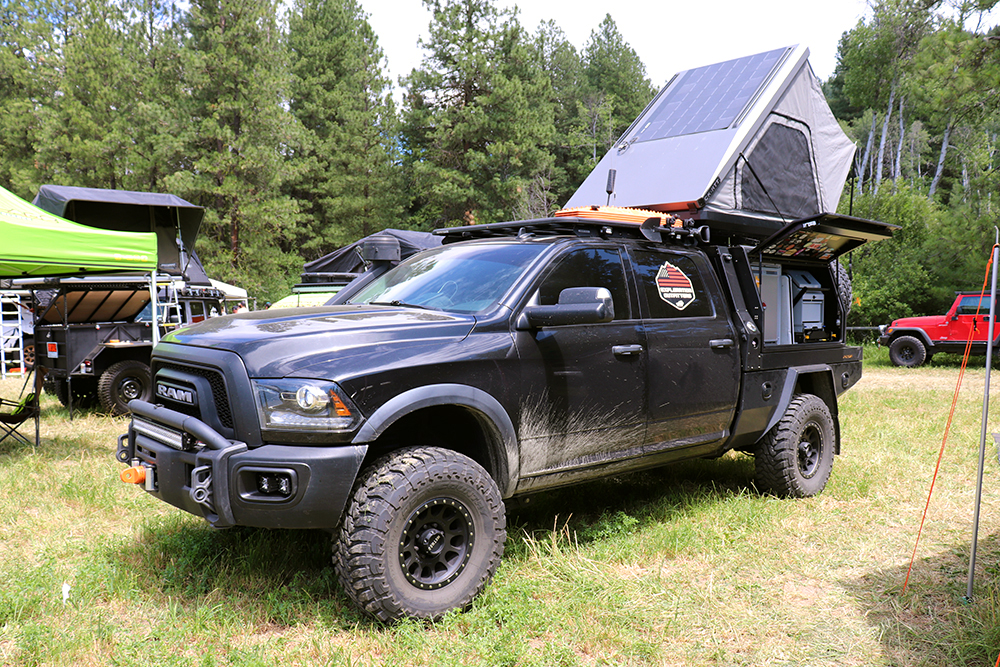 Matt and his team at Exploration Outfitters started with a stock RAM 2500 Cummins Diesel and completed many upgrades to the truck itself, including 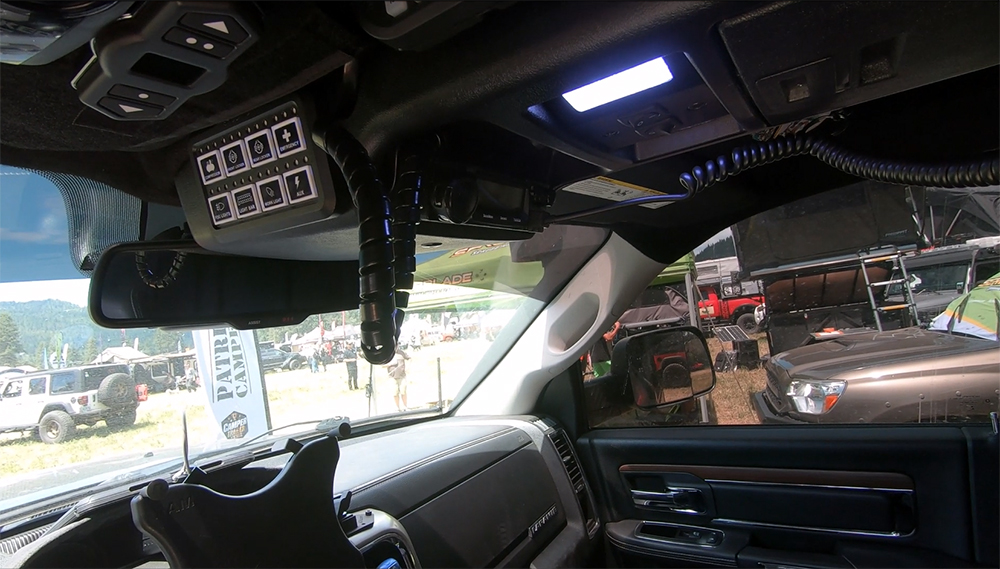 Matt and his team completely stripped the interior out of his rig and covered the floor, ceiling, interior of the doors, back of the cab and firewall in Dynamat sound dampening insulation, which he claims, “Really helped with the road noise.” He replaced the headliner and covered it with black carpet because, “You know it’s overlanding and you’ve got patches to show right?”.

Matt’s favorite thing on the whole truck is the overhead console that’s actually made for a Toyota FJ cruiser. “We modified it, rewired it and built new brackets and installed it. Then we added our sPOD controls and all our communications. Everything else built into it has kept it all from cluttering up down below and kept it all in one place where it’s easy to get to.” Matt said it was a lot of work but it turned out well. 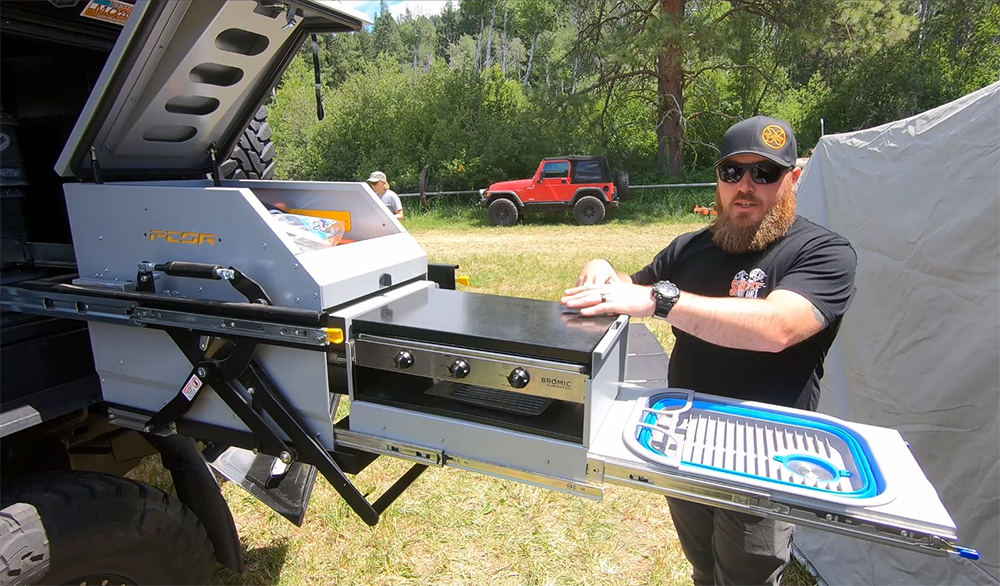 Right off the bat when looking at this expedition RAM, the feature that stands out most is the PCOR (Patriot Campers Off-Road) flatbed & canopy system for which Exploration Outfitters is a dealer here in the U.S. “What we would call a flatbed they call a tray and basically the tray is the lower portion and then the box is a separate component, the canopy,” states Matt whose referencing the terminology used in Australia where Patriot Campers originates. The canopy portion of this system is comprised of the roof top tent, as well as the storage and integrated features that sit on the flatbed.

On the tray, Matt pointed out the storage compartments at the four corners in front and behind the rear wheel, as well as a storage tray in the rear. “One of the really cool things is all of it is tied into the keyless entry on the truck, so hit your keyless and it locks every compartment on here so you’re not fighting with keys and trying to lock stuff.” he states. A 20 gallon fresh water tank is built into the tray, as well as LED lighting.

Moving onto the canopy storage, a large driver’s side compartment that extends the length of the flatbed was open, revealing a nice Dometic fridge/freezer. Also in this compartment is a really ingenious kitchen unit that is very compact. It extends out on sliders and down. From there the unit expands out to a stainless cooktop and kitchen sink. It even has storage in the top, yet all of this fits into a self-contained unit that’s about the size of two, 5 gallon jerry cans side by side.

In the rear sits 2 full-size spare tires neatly tucked into the canopy system for a nice, low profile.

On the passenger side a full flatbed length hatch reveals 2 large compartments, one for bulk storage like tools and other utilitarian items, and the other housing a drawer and all the canopy system electronics controls, including:

Matt mentioned there was a solar panel mounted to the roof, supplying juice to the canopy battery.
It’s really a nice RAM expedition truck and seems very practical for hitting the trails, as well as getting there on the highway. An impressive build by Matt and his team at Exploration Outfitters indeed. 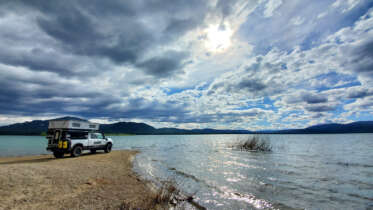 With a short time frame of roughly five days in the Four Wheel Camper AEV rig, I was able to squeeze in a couple Sierra Nevada adventures. The first involved the truck camper in an off road 4×4 adventure where a friend and I traversed a steep valley of dirt…

Turnkey Overland Ford Ranger You Can Buy New From Dealer