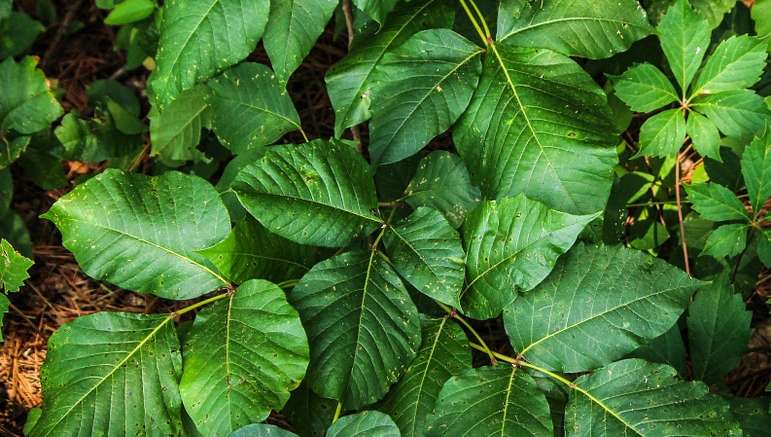 Depending on where you live, you may or may not have encountered a poisonous plant or two in the wild. If you’re an avid camper like me, you definite have. Trekking along the Appalachian Trail through southern Tennessee, I’ve had my fair share of rashes and bumps from a lack of care and long pants. A little known fact is that all three species of plants mentioned in this article cause the same allergic reaction. Here we’ll learn which plants are poisonous and how to identify them around your campsite.

While this one may not be a surprise to you (especially since there’s a Batman villain named after it) you may not be aware of how this easy-to-miss vine literally gets under your skin. Characterized by having asymmetrical buds and by having three leaves per bud, it has been immortalized in the popular phrase: “Leaves of three, let it be”. Aside from these characteristics, there are two species of poison ivy.

A little less known and less abundant than poison ivy, poison oak is just as irritating. This plant, like poison ivy, has three leaves that grow on buds that never grow side by side. The leaves are notched and oblong, growing in vines and stalks along the coastal regions of the United States. Depending on the coast, there are two subspecies of poison oak:

Decidedly different than the above two species, poison sumac does not adhere to the three-leaf rule. Rather than being a vine or a shrub, it grows as a tree with leaves sprouting all along bright red stems. Usually found in wetlands along the east coast, poison sumac can be distinguished from other sumacs by their low-hanging berries and flowers.

There you have it. Pay attention to the leaf patterns and shapes to identify the poisonous plants that may be lurking near you. If you contract a rash after coming in contact with one of these plants, it is advisable to see a doctor if possible to see if your allergic reaction will become a severe one.