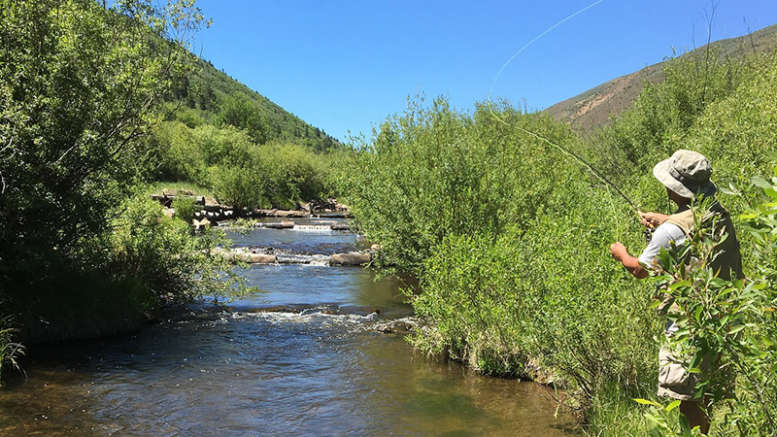 Many fly fishermen know that 80% of a trout’s diet is comprised of nymphs, but not that many anglers are successful nymph fisherman. Dry flies allow an angler to physically see what is happening and assess what they are doing visually. You can see takes and refusals that allow you to analyze your fly patterns and presentation.

In most cases, when nymphing, you can’t see the trout. A series of educated guesses is needed to decide what is happening beneath the water’s surface. Fly selection is one of the first decision you need to make when you arrive at your fishing destination. It is common practice to fish two or three nymphs at a time. By fishing multiple nymphs you can cover several insect food sources.

The first fly on your rig is the anchor fly. Ideal patterns  should be larger than the others on the rig and heavy to help get the nymphs to the bottom. Many Stonefly nymph patterns in size 8-14 have these attributes and are popular anchor flies. Brad Befus’ Wired Stonefly is one of my favorite stonefly patterns. It is a simple and effective pattern that has a slim profile and sinks fast with a wire body. It is available in a good range of sizes and two colors to match golden and brown stoneflies­.

Caddis fly patterns are great flies to fish underneath the anchor nymph. There are two life cycle stages that different caddis patterns represent. Cased Caddis patterns are tied to represent the larva breaking out of its case. Caddis larva make cases out of stone and debris which they then attach to rocks, logs, etc. on the riverbed. When fishing a cased caddis pattern, you are trying to imitate one of the caddis larva that broke off the structure. Wilcox’s C-Squared is a great cased caddis pattern that gets deep with a tungsten bead and always produces fish.

Caddis pupas are the stage between larva and adult caddis. In this stage the nymphs have developed antennae, and wing pads. The pupa stage is the most vulnerable stage of a caddis’ lifecycle. The pupa will drift long distances helpless in the water column as it fights its way to the surface to hatch. During the early stages of a caddis hatch fishing caddis pupa patterns like La Fontaine’s Sparkle Pupa deep in the water column can be deadly.

Baetis or Mayfly nymphs are also popular as a second nymph under the anchor fly or when fishing three nymphs, as the third, under the caddis fly. These nymphs are generally smaller (size 16-22) and represent insects like Blue winged olives, and Pale Morning Duns. Very well-known insects to the dry fly fisherman. Lance Egan’s Iron Lotus is an effective Baetis pattern that every angler should try.

There are also attractor nymphs which do not represent any specific insects. These patterns are generally flashy and comprised of colors that are not natural. They often have profile characteristics of natural nymphs and can be taken by trout for a variety of insects. The prince nymph pattern is a classic attractor pattern that has been used by anglers for many years. Some attractor nymphs like the Mop Fly do not represent any aquatic insects but have proven themselves to be effective in all waters for trout. There are also many more insect categories that have a large array of nymphs to represent them as well as egg and worm patterns.

With countless patterns to cover the insect categories it can be hard to find the ones that work well for you. When trying new patterns give them time and the opportunity to work for you. Having confidence in your fly selection is half of the battle. The most productive fly patterns for an angler are the ones they use the most. It does not mean that they are the best for that instance, but that they have confidence in them and they stay in the water longer.

When selecting flies it is important to pay attention to the size of the fly. Many anglers make the mistake of grabbing the biggest size nymph in a pattern. Downsizing from size 12 nymphs to 16 and 18 is often very productive. It is hard to fathom how trout find the small morsels of food but they do. As anglers we have to remember that trout are creatures of habit when it comes feeding. When they are keying in on insects that equal a size 18 a larger fly will often go ignored.

Be the first to comment on "Nymphing for Trout: Fly Selection"