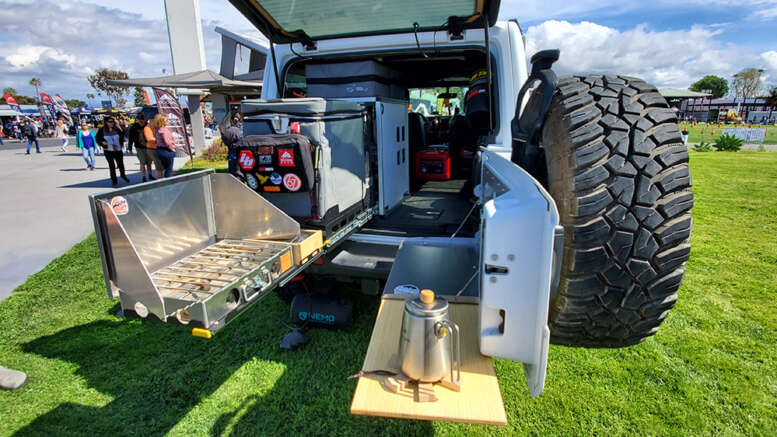 Ryan Hall, owner of this awesome overland Jeep JL is the Creative Director of Goose Gear, manufacturer of premium overland vehicle storage products based in Huntington Beach, CA. His white JLU was on display at the 2020 Four Wheeler Adventure Expo in Costa Mesa, CA featured in the Goose Gear booth.

Upon approaching Ryan’s JLU, I immediately was drawn to the Goose Gear camping system in the rear – always been fascinated with and a fan of their slide-out kitchen, rear seat delete and flooring/storage configurations for overland converted SUV setups. 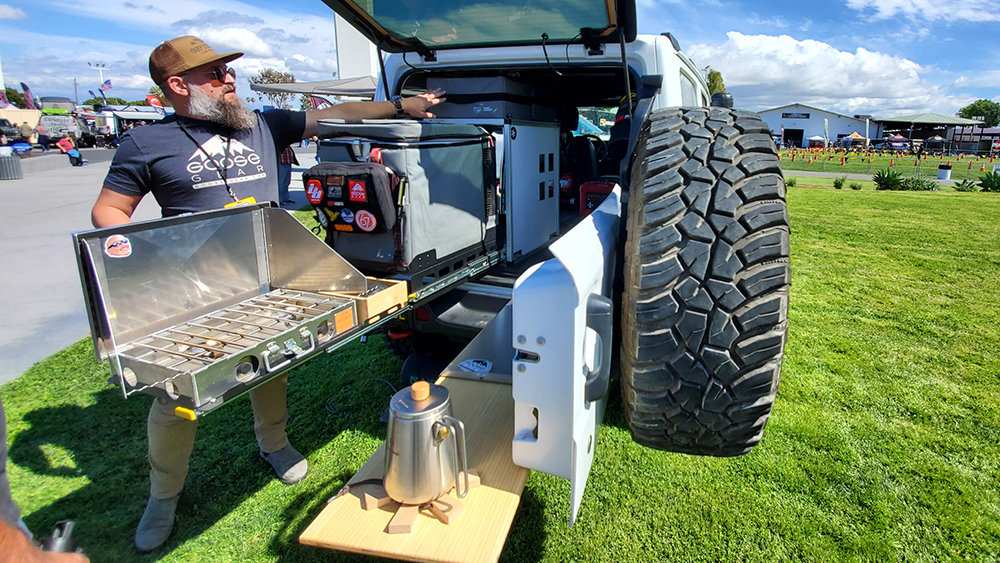 Ryan’s particular configuration features a Goose Gear 60%/40% complete rear seat delete, which contains lockable storage in the floor. And extending out of the rear of his Jeep JLU, you can see what visually draws crowds to the Goose Gear booth. Ryan’s particular setup features Goose Gear’s slide-out CampKitchen with a Cook Partner Stove, CampKitchen Utensils Box, and he’s running a Engel MT35 Platinum Fridge in his particular setup. There’s a cool fold down countertop that also mounts to the inside of the JLU’s swing-out gate, and it extends out for further countertop surface. Atop Ryan’s CampKitchen sit Front Runner rigid canvas storage boxes. 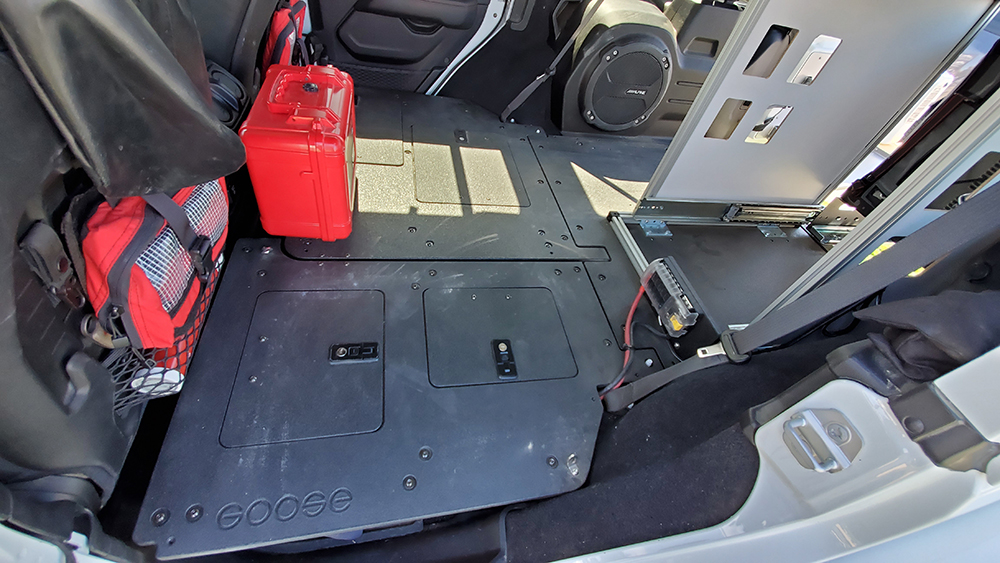 Ryan has included in his Jeep Wrangler JLU setup a 10 lb. CO2 Power Tank with their custom JLU Sports Bar mount. With no moving parts or electrical power needed, this provides ample air for your tires on the trail, and has enough pressure to run air tools like an impact wrench at full power. The Power Tank is accessorized with their Power Tank’s Overlander Series Safety Tire Inflator.

Other accessories include an overland equipped first aid kit and sitting next to his JLU Jeep is an Equipt Expedition Outfitters 60L AluBox, fitted with Goose Gear’s Top Plate accessory, so it’s not just great storage but also works well as a step stool or side table when needed on the trail. Ryan also has a NEMO Equipment Pressure Shower. 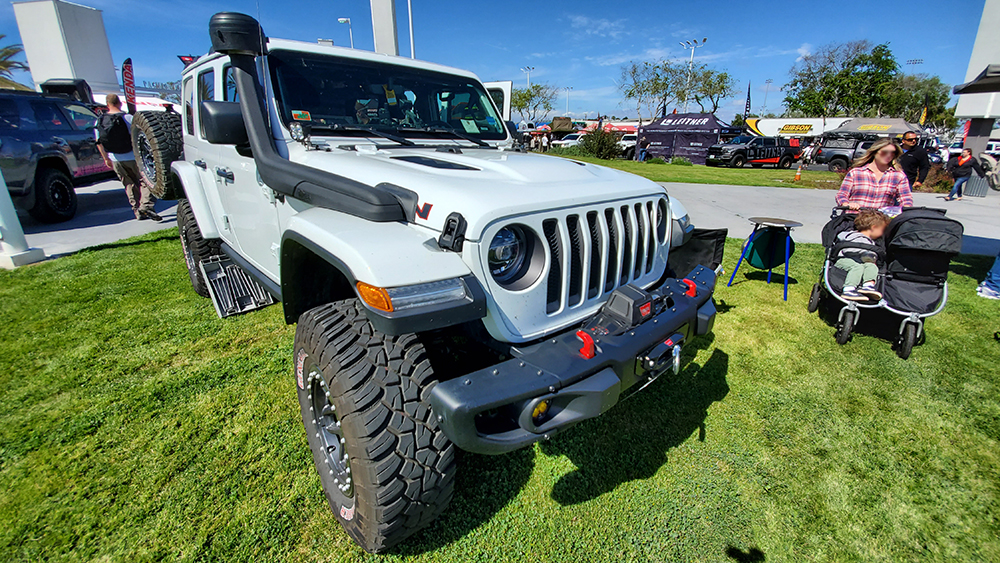 This overland Jeep JLU is a bit special in that it’s outfitted with AEV’s prototype off road upgrades they now offer. The upgrades on Ryan’s JLU include: 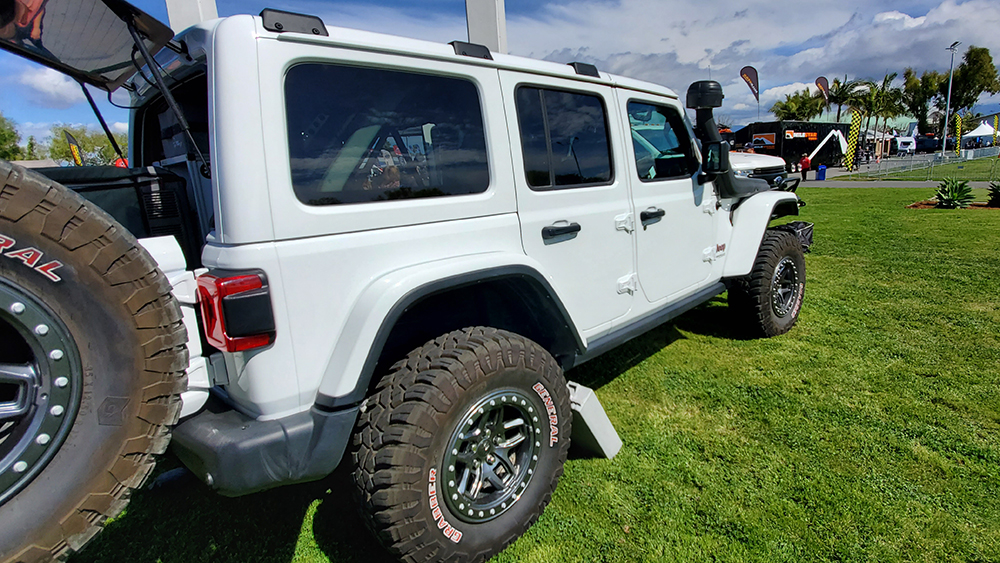 Ryan mentioned, “I love my Baja Designs Squadron Pro Auxilary LED lights! I have a set on my JL pillars with a work scene setup as my ditch lights and for camp. I also have a set of amber LED lights as my fogs”.

Thank you Ryan for sharing your awesome Goose Gear outfitted AEV Jeep JL, we’re a big fan and your setup proves you’re definitely a Savage Camper!  Follow Ryan’s journeys on Instagram: @hatchetandgravel and you can also follow the latest from Goose Gear: @goosegear

‘Jeep Vader’ the Force is Strong with this Overland JKU Jeep