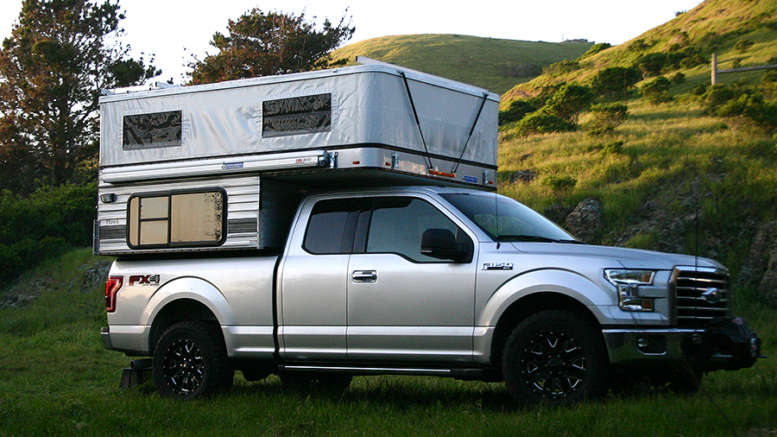 In production since 1948 it isn’t really necessary to introduce and summarize the Ford F-150, so we’ll just get to the point of hopefully why you’re on this post – for one reason or another, you’re researching a Ford F-150 camper.

There’s alot to consider – weight, profile, layout, features, insulation, interior space – it all can be overwhelming at first.

The two most popular types are hard side campers and pop up campers. Keep in mind you’re always going to have some trade off between weight and features. Some of the differences include:

There’s also a host of hybrid truck campers on the market now. Some tend to be geared toward a more minimalist market with a key focus on weight savings and minimal features.  Others are variations, with pop-out side/rear panels, or even a hardside pop-up camper.

Let’s get to some F-150 camper examples:

Lance is probably the most well-known hard side camper manufacturer. Designed specifically for half-ton trucks like the Ford F-150 with 5 & 6 foot beds, Lance’s 650 is a hard side camper with a full menu of features that come standard, including a bathroom with a toilet and black water tank, tankless water heater, forced air furnace & exterior wash station amongst the other standard features you typically see.

FWC is the most well-known pop-up camper manufacturer. As the name eludes, these campers are built to be rugged to handle varying off-road conditions – a testament to how well built Four Wheel Campers are. They make 3 different models that an F-150 can accommodate, depending on bed length.

The Super Lite is a series of truck campers designed for 1/2 ton trucks, that range in dry weight from about 1,120 – 1,360 lbs. It’s a hard side camper, but the weight of the lighter models are comparable to a pop-up camper. Basic amenities are included, such as a refrigerator, 2 burner stove, storage, queen size bed, sink and more.  Some models offer a water heater as optional or standard. Some models offer grey water storage, and the largest, either closet storage or an optional shower.  Toilet can be achieved with a portable.

The single most unique feature of Alaskan campers is the fact they are a hard-side, pop-up camper, or a “telescopic camper”. Pictured above, is the 6.5′ model, which has a dry weight of 1,390 lbs.  Lifting the top is achieved through an electric hydraulic pump and heavy-duty stainless steel pistons.

On the fringes of what constitutes a camper vs. a camper shell, the Habitat Truck Topper is beautifully crafted out of aircraft quality aluminum, as you can see on Greg Scott’s Overland Ford Truck (Yes it’s a F-250, but AT Overland builds Habitat Campers for the F-150 as well). Weighing only 340 lbs and intentionally slim on features compared to a full-blown camper, the Habitat includes an all weather fold-out tent made exclusively by NEMO Equipment, with a bed for two that supports 600 lbs and has a dense foam mattress. Options available include LED lighting, cabinetry and even forced air heating.

F-150 Payload Capacity for a Camper

Just to get an idea of payload capacity, here’s some stats for some of the more recent F-150 models years:

The XPTray: Aluminum Camper Flatbed with Storage by XPCamper