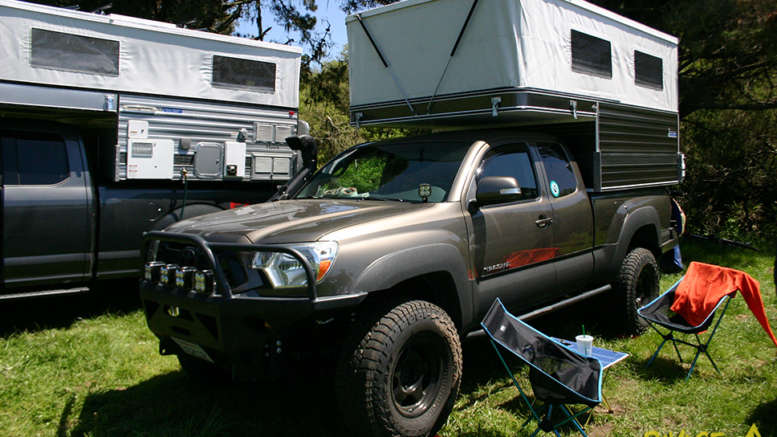 This awesome, custom 2012 Overland Toyota Tacoma rig, topped with a custom Four Wheel Camper, was built, and is owned by Wade and Michelle Sumner of Sacramento, who came up with the vision for their Tacoma, and performed much of the outstanding customization work.

At first Wade mentioned they were a bit hesitant to tackle the project themselves, but “after committing to drilling a 5” hole in the fender for the snorkel, I knew we were pretty much good to go from that point on.”

The results speak for themselves, as the custom fabrication, assembly and finish work on this overland Toyota Tacoma truck/Four Wheel Camper combo is top notch.

Custom front and rear bumpers by CBI Off-Road Fabricators in Idaho cap the ends of this truck.

The front bumper is CBI’s Moab 2.0 Front Tacoma Bumper – this particular one being aluminum, so it’s much lighter, yet sturdy enough to handle a winch. The CBI High Clearance Rear Bumper is modular, allowing for mount of a couple jerry cans with a full-size spare, or the CBI custom-fabricated bike rack module seen in the video/pics. CBI rock sliders are also installed. 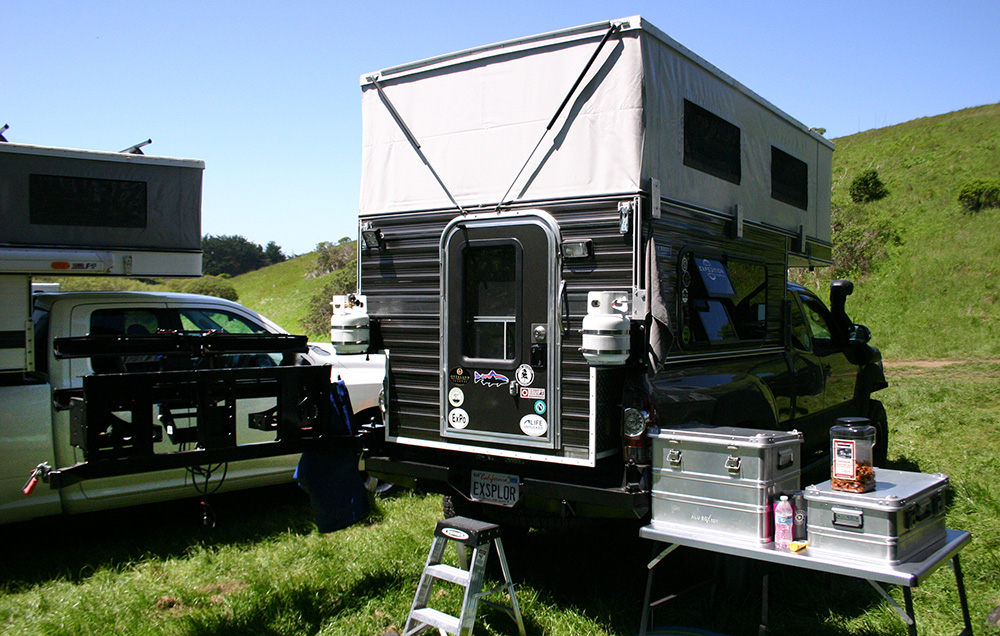 Inside the truck cab, the interior is essentially stock, except for 2 separate navigation systems: a Garmin 276cx and an iPad mini running a couple different navigation apps. 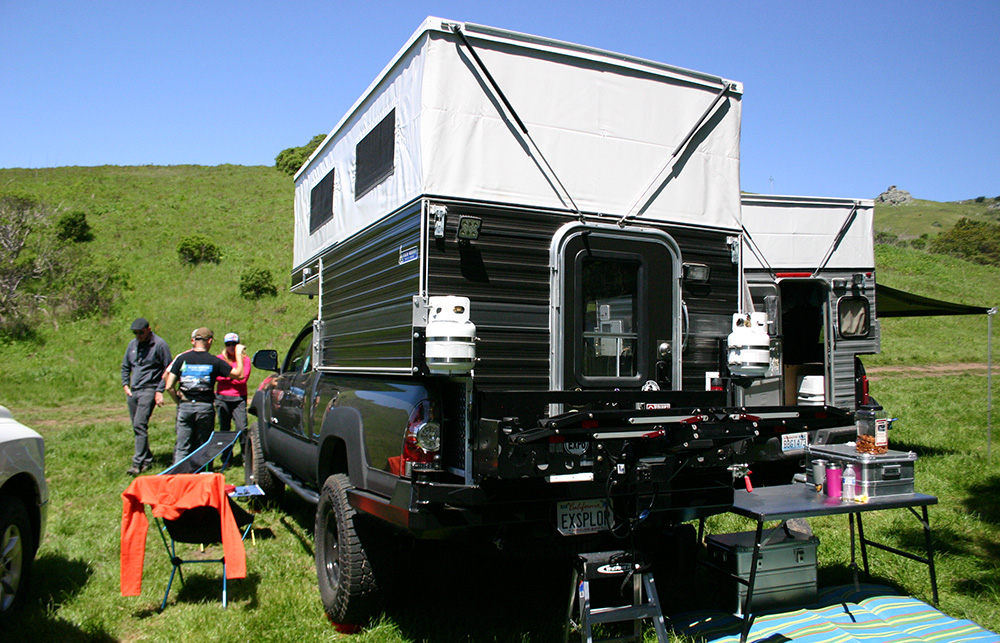 The camper is a 2015 Four Wheel Camper Eagle model for which 2015 was the last year it was made. The truck camper is 69” wide, and designed to fit Tacomas.

For those familiar with a Four Wheel Camper, you might notice the custom color on the side of the camper, matched to the color of the truck.  This was achieved by Wade and Michelle, who painstakingly applied 3M 1080 Vinyl Wrap in segments to the side panels of the camper. Personally, I can tell you the quality of work was flawless as if OEM, yet the look, undeniably classy and one-of-a-kind.

Side Note: Here’s a list of Toyota Tacoma campers if you happen to be looking for one.

“My wife and I have been backpackers for years, and we wanted a very limited amount of stuff in the camper, so I bought the basic shell version, because I already had a vision of what I wanted to build out to have as much living space as possible” stated Wade. “It’s a fairly small platform and truck, so every inch counts, and we wanted it as lightweight as possible, so I built out the interior to suit what we wanted.”

To suit their minimalist interior vision, Wade designed a versatile wrap-around seating scenario, where they could both sit and hang out.  A Lagun Marine Swivel/Telescoping table that adapts to the space as needed was also installed.

Custom storage under the seating was built and all wiring replaced with Blue Sea Marine grade wiring. Four Wheel Camper cabinets were ordered and customized, to house camping gear and act as a closet.

The camper roof sports two 100 Watt solar panels, with a BlueSolar charge controller and Samlex Power battery charger tucked away in the interior. A Victron battery monitor provides info on status of the charge.

Overall, this Tacoma is an impressive overland truck, in looks, vision and craftsmanship, and we really like the brown color too!  Wade and Michelle Sumner’s Overland Toyota Tacoma is truly a ‘Savage Camper’