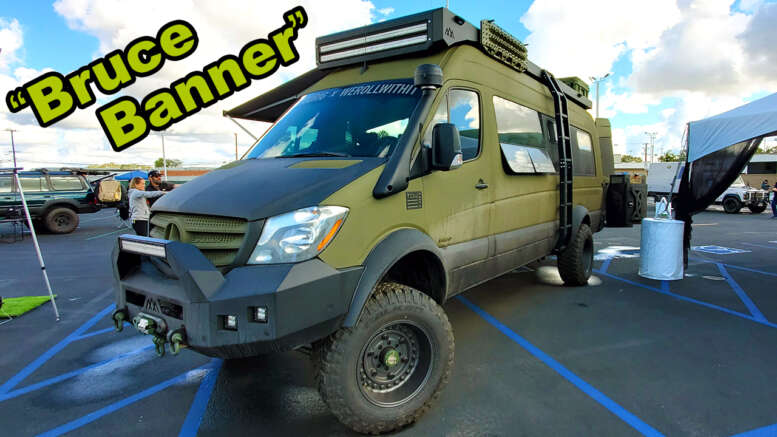 Mercedes Sprinter camper vans have become a staple in the overland community, and there’s some great builds out there you’ve probably already seen. Personally, I’ve seen quite a few of them now around at overland adventure shows across the U.S. At the Four Wheeler Adventure Expo in Orange County, CA only a week before the coronavirus outbreak started locking down the state, I came across an overland Sprinter Van that at the time of writing this article, stands above all others previously seen. It’s nickname says it all, please meet “Bruce Banner”.

Bruce is a TouRig built beast of an overland Sprinter van on the outside, and plush with all the comforts of home on the inside with the latest in off-grid technology. It’s owned by www.werollwithit.com who live in the van full time with home base near Borrego Springs, CA and Levi LaLonde was cool enough to give Savage Camper a tour of their hulking Sprinter camper van.

Starting where Bruce obviously gets its nickname, the exterior of this burly 4×4 Sprinter van is coated with green Line-X coating, playing to its Hulk-like appearance and adding protection to the outer skin.

Capping the ends are Backwood Adventure Mods bumpers – part of the Nomad Series. The front bumper has a bull bar with integrated LED light bar and a winch with Factor 55 fairlead. For some reason, it’s muscular angular shapes remind me of the robot tank that the Six Million Dollar Man fights. The rear bumper is a swing out, with a storage locker swinging out to one side, and spare tire carrier to the other, so you can open the rear doors.

On the roof is the biggest, baddest roof rack I’ve ever seen. It just so happens that this is a prototype from Backwoods Adventure Mods. Up front it incorporates two large LED light bars that must provide more than ample lumens at night. They are controlled from an sPOD lighting power distribution system inside. Mounted up top on this massive roof platform is UHF/VHF from Rugged Radios, a weBoost antenna, Maxtrax, a series of Roam Adventure Co. storage boxes, a hi-lift jack and a 375 Watt solar panel. The ladder system on the side is also a prototype from Backwoods Adventure Mods.

Other exterior overland features include a Terrawagon Snorkel and a Thule Awning out over the passenger side access. 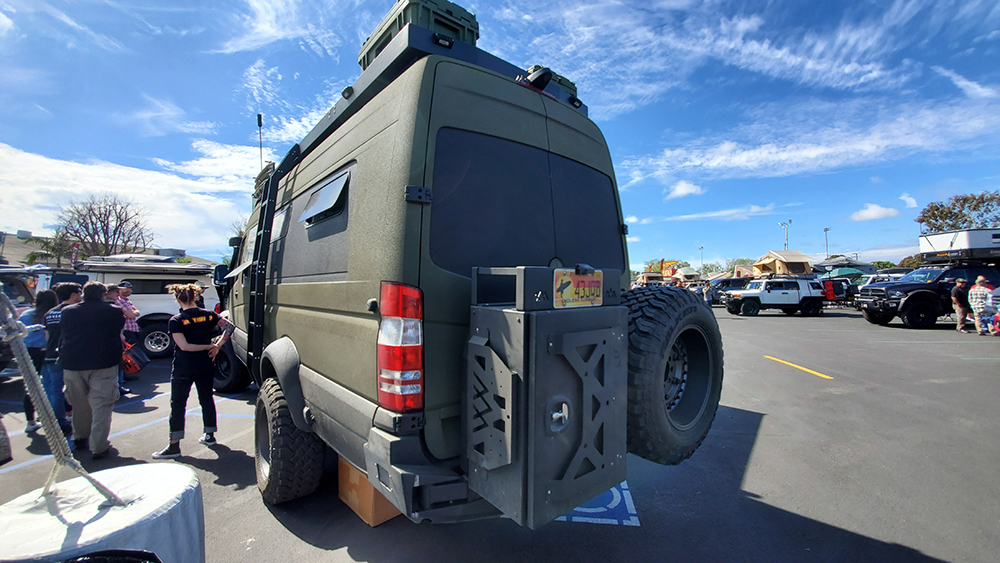 The drivetrain upgrades on Bruce are least visible, but truly some of the most impressive upgrades on this Sprinter Van, It has full solid axle swap-outs with Dana 60 axles in the front and rear and old-school manual hub lockers. Wheels attached to these Dana 60 axles are 20”x12” Black Rhinos wrapped in 37”x13.5” Falken Wildpeak M/T Tires. Suspension includes Dirt Logic Coilovers. A 3-to-1 Atlas transfer case has been integrated, where the camper van can run in RWD, FWD or 4WD high and low. There’s a bunch of custom bracketing and driveshaft work to complete these truly legit 4×4 van upgrades.

While looking underneath, Levi also pointed out a Viair system for onboard air enough to take wheels on/off with air and other air needs.

Opening up the rear swing out doors of Bruce, you’ll see some of the most impressive solar integrated power systems that are fed by the 375 Watt solar panel up on top. 3 Victron Energy lithium batteries house 600 amp hours of storage run by a Victron MultiPlus system which combines an inverter and charger into one system. The build out of the solar power system in this Mercedes Sprinter was performed by TouRig.

There’s a 39 gallon water tank and a full Rixen Enterprises diesel powered heating system for warm air and hot water, running off the same fuel source as the rig itself. 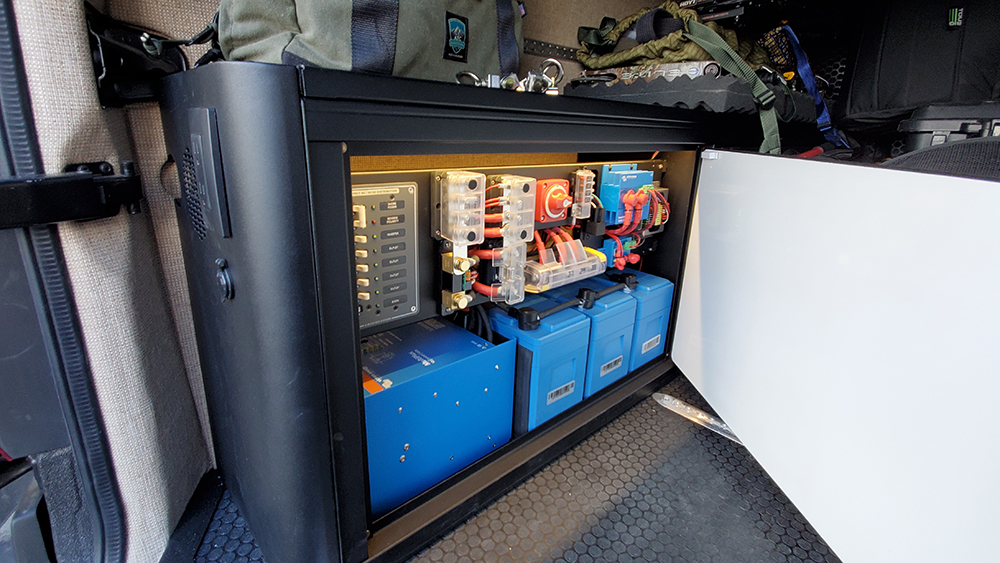 Seating within Bruce has been upgraded to Scheel-mann seats. Exclusive to TouRig builds are their custom cabinetry with beautiful walnut countertops and matching floors and a dual stainless-steel sink. The ceiling and walls are covered in a sahara tartan fabric, and windows have custom TouRig drawstring accordion curtains that are well-insulated. The cabinets have LED over-counter and under-counter lighting with dimmers, and there’s ceiling LED puck lights as well

Up in the Sprinter camper van’s cockpit, there’s all sorts of cool gadgets, including an 8” iPad for media work. There’s also the sPod control for lighting and an Alpine Halo system screen for controlling separate stereo systems inside and outside the van. And finally, a 4th screen which is the Garmin Overlander that allows for navigation when there’s no services available.

Digital control panels near the bed include the Victron Energy Systems digital display which reports all the relevant data like power being generated by the solar panel, power usage and time, etc. There’s also a multi-control for the Victron inverter system as well as a control for the heat exchanger and thermostat for the Rixen heating system.

There’s of course a full bathroom with a shower which I didn’t get to see in the tour, and a full size bed in the rear that sits up over the power, water and heat systems, with a bunch of additional stoarge space. Overall, I was just as impressed with the interior of this Sprinter camper van as the exterior. 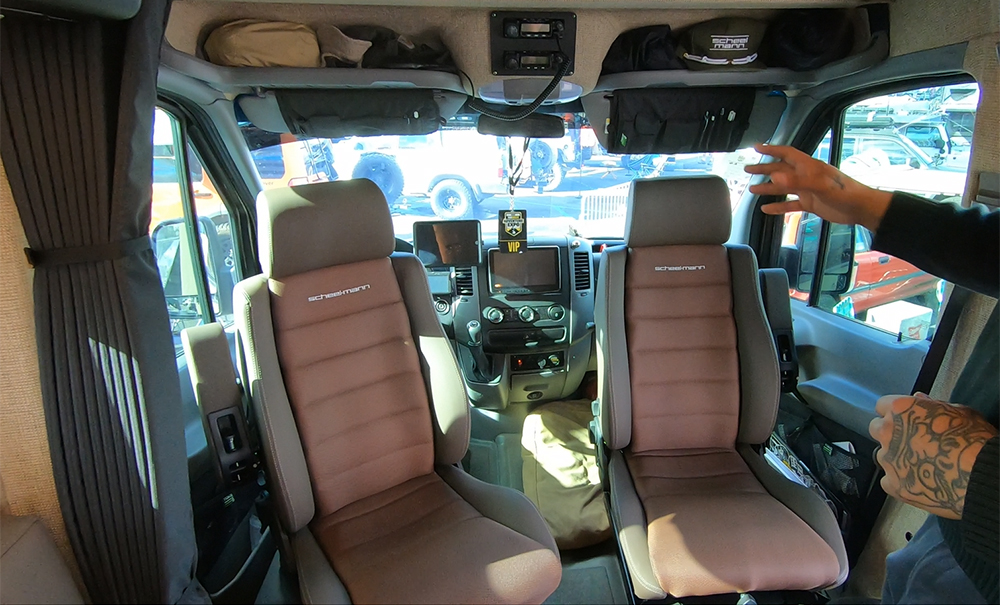 Definitely want to give a shoutout again to WeRollWithIt for taking the time to show Savage Camper around Bruce’s features. You can follow them on INSTAGRAM @werollwithit