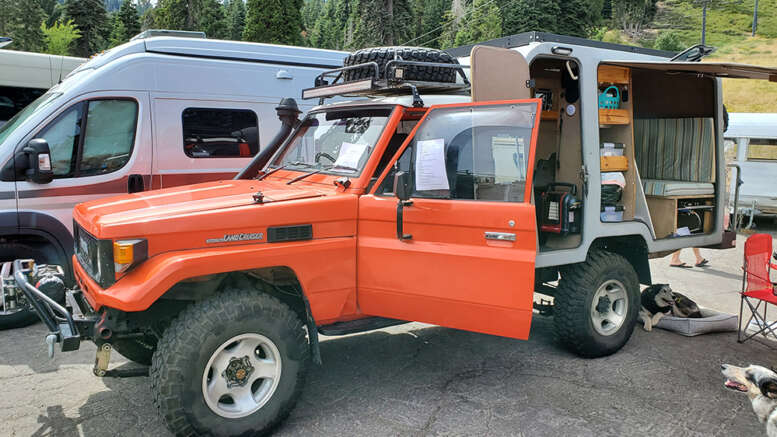 When first crossing paths with this bright, beautiful orange Toyota HJ75 UTE at the Adventure Van Expo in Tahoe, CA, it reminded me of my Tonka trucks as a kid. Here in the U.S. it’s so rare to see these, let alone one with California license plates and a full camper on the back. I met Jeremy Weis, owner of this UTE who happened to have it on sale at the event (update it already sold!).

Jeremy gave us a nice rundown of the history behind his UTE. Imported from Australia, it was originally a pickup however a custom camper was made and this is one of two. The other UTE went through the Middle East into Europe, and was sold in Germany. “This one was slated to go to Africa, but the original builder who got too old decided not to make the trip. I bought it from them in Pine Gap, Australia and had it imported”, Jeremy states. “Luckily, it’s still really low miles 45,000 miles on it. It’s a 4L diesel, 5-speed manual transmission and right hand drive so it really does surprise people when the dog is driving”, Jeremy quips.

What’s really amazing is Jeremy figured out the process to convert his non-US HJ75 into a road-legal vehicle with California plates and a new US government issued VIN. I didn’t even know this was possible. Apparently vehicles imported this way are called “Grey Market Cars”. People expressed enough interest that Jeremy was gracious to share his knowledge on a website he created called CA Import Experiences

Some information pulled from a spec sheet Jeremy created about his Toyota UTE include:

He also went through and performed general maintenance throughout, including the knuckles, bearings, seals & gaskets.

To update his Toyota UTE, Jeremy added 2” lift shackles with some leaf spring modifications and Boss Air Bags. Peripheral updates included a roof rack with an LED light bar, snorkel and custom brush guard front bumper fitted with an 8,500 lb winch. Jeremy comments, “It’s a blast to drive! And it gets about 20 miles/gallon”. Not too shabby!

The structure of the camper is honeycomb plastic skinned in epoxy which means it’s very well insulated. All opening hatches have rubber seals to keep out dust.

One cool feature that this camper incorporated for its original destination of Africa are the small, high windows which were purposely designed like this to keep people from peering in, and to help prevent people from easily reaching into the camper.

On the roof of the camper, Jeremy fabricated a custom rack out of server racks, and mounted 400W of solar panels tied into a 30 amp solar charger and a 1,000 AIMS inverter/charger that also has shore power so you can plug it into 110V.

On the rear of the camper, Jeremy cleverly added 2 Craftsman diamond-deck storage boxes which hold a bunch of their gear like chairs, tools, etc. A 20lb propane tank sits on top of these.

Camper access is a large hatch that opens upward, acting as a small shade awning. Jeremy and his wife built out the interior of the camper themselves.

Jeremy placed the electronics under a sofa that folds out into a bed at the rear of his camper interior. To maximize this space even further, he integrated a slide-out stainless kitchen with a Dometic stove and sink.

In the floor is a 12V pump and a 10 Gallon fresh water tank. All the lighting is controlled via an 8 gang switch panel with USB ports. And of course, Jeremy added a 100W Bluetooth Kenwood amp with 4” speakers, not to mention a Wifi repeater. There’s 110 Volt AC outlets in the front of the sofa.

As mentioned at the beginning of this article, Jeremy has already sold this Land Cruiser. I was fortunate to get to meet him and record his UTE’s story before it went off to it’s happy new owner.