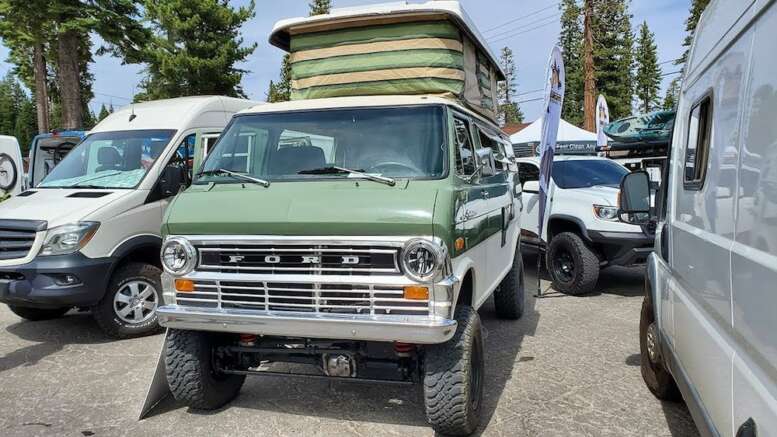 While strolling around the 2019 Adventure Van Expo in Tahoe, CA, I came across this stunning 1971 Econoline Sportsmobile, which I had only previously seen pics of periodically online. I had hoped at one of these overland events I’d eventually run across this vintage van and luckily my wish was granted. Even better, I also came across its owner, Joe Arlo (IG: @joearlo) who’s a super nice guy and was happy to do a video walkaround to share the background of his vintage overland Sportsmobile, dubbed the “808Van”.

Apparently, this Sportsmobile was one of the first Ford conversions the company built. Conversing with Joe, he mentioned “Sportsmobile mostly built VWs in the 60’s. They really didn’t do too many Fords until the late 70’s and early 80’s. I know of only 2 early 70’s Fords: mine and one owned by @72_smb”.

The nickname “808Van” comes from the area code in Hawaii where the van was owned and located for some time prior to Joe acquiring it. While in Hawaii, the body & paint had already been refurbished and the Sportsmobile was in decent shape overall. “I really wanted to set it up as a resto mod so I could actually use it and have actual adventures with it take it down to Baja for a couple weeks that sort of thing” stated Joe. So that’s the direction he took. Joe giving a rundown of the history of his 808Van Sportsmobile

Joe updated the powertrain with a new 370 hp 302 cu in. blueprinted V8 capped with aluminum heads, Edelbrock EFI and plumbed with an updated cooling system. The original 14 gallon fuel tank would have made for frequent fuel pit stops, so tank capacity has been more than doubled to 30 gallons.

An automatic overdrive transmission was added with a Dana Spicer 20 transfer case and a Dana 44 front axle. The van has a Dana 60 rear axle. 4 wheel disc brakes were added, along with suspension airbags in the rear to improve load stabilization.

Since the van resided in Hawaii, Joe wanted to carry that theme over to the interior. He mentions, “It’s kind of got that vintage feel, but with modern functionality”. The interior as it had stood was in decent shape, but after looking at pics of the original interior, Joe certainly took things to the next level.

As far as the general layout, it’s based on Sportsmobile’s RB50 interior arrangement. Upholstery, curtains, etc were all completely updated, and carry those traditional Hawaiian floral patterns. The flooring is bamboo and the cabinetry is made out of beautifully finished koa wood. In terms of creativity, Joe went all out – even incorporating a real 50’s diner counter top with stainless sink that’s lined with the traditional smooth, soft aluminum trim you see. There is also a matching removable table made of the same. 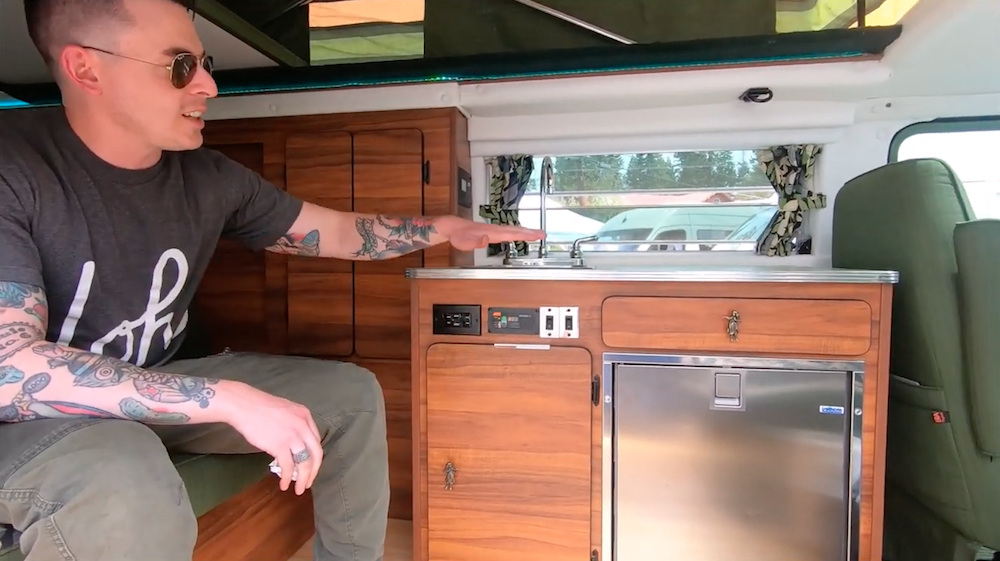 The look/feel might be vintage, but certainly not the functionality with the modern amenities Joe added, including:

Joe even had a local marine canvas shop custom fabricate a new Sunbrella canvas top for the 808van since the old one was a bit dated and musty.

The results of Joe’s creative talent and resto-mod updates  to his 808Van speak for themselves, taking what was already a cool overland rig and making it iconic. You can follow Joe and the 808Van on his Instagram @joearlo or visit his website www.myreversecommute.com